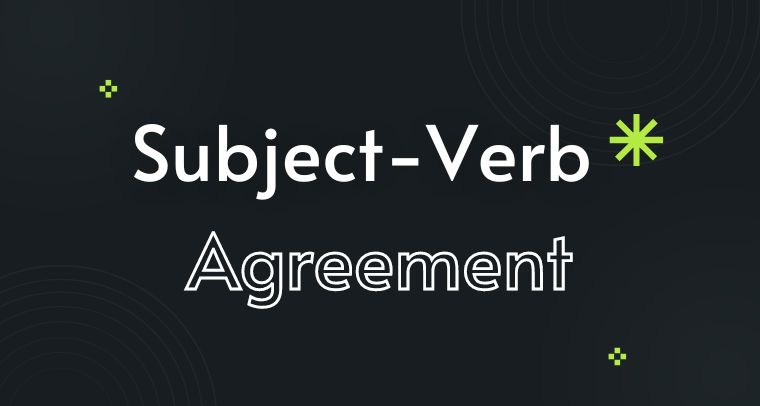 The rules of the Subject-Verb Agreement are pretty simple. Just make sure the verb agrees with the subject in number. That is, use a singular verb with a singular subject and a plural verb with a plural subject. The subject is who or what performs the action in a sentence (for example: “He walks” or “She runs”). The verb is what’s being done (for example: “Walking” or “Running”). If you don’t know which word to use in a certain situation, keep reading! We’ll explain all about the subject-verb agreement below.

That said, there are some exceptions to this rule:

Indefinite pronouns are always singular, even if they refer to a group of people or things. Some indefinite pronouns are anybody, anyone, anything, each, either, everybody, everyone, everything, neither, nobody, no one, nothing, one, somebody, someone. To make sure you have a subject-verb agreement, you need to identify the subject and make sure the verb agrees with it in number.

Some subjects are compound, which means they are two or more subjects that are connected by a conjunction (e.g. and, or, but). In these cases, the verb must agree with the subject that is closest to it. For example:

In this sentence, there are two subjects (my friends) that are connected by the conjunction “and”. The verb (“is going”) MUST

Compound subjects are always singular, meaning that only one of them can be used.

Subjects joined by “and”

Subjects joined by “or” or “nor”

Sometimes the Subject Is Hard to Find

You may have noticed that the subject of a sentence can be hard to find. It’s not always easy to spot, and sometimes it can be hidden in plain sight.

You might think this rule applies only when the verb is vague or unstated; for example, if you ask someone whether he wants coffee or tea (or anything else), he’ll probably say “I’d like some coffee.” But there are other times when the subject isn’t obvious at all: if your boss asks you what time you’re going home tonight and you don’t know how long your commute takes or which direction it takes you in—and so on—then perhaps he shouldn’t expect an answer! And even if you do know exactly how long each trip will take and where it starts from… well… maybe not everyone would want their boss knowing those details either! So what should we do with these situations?

Words that look plural but are singular

The English language is full of words that look like they should be plural, but are actually singular. These words can trip up even the most seasoned writers. Some of the most common words that look plural but are singular include data, media, alumnus/alumni, criterion, and phenomena. When in doubt, consult a dictionary or style guide to make sure you’re using these words correctly.

It should be easier now to write the subject-verb agreement

You’ve probably heard it before: “The cat chased the mouse.” The verb “chased” is in the present tense, and it agrees with its subject—the cat—in number and gender. This means that you have to be careful when writing sentences like these so that they’re grammatically correct. If you don’t follow proper grammar conventions (like using appropriate articles), your writing will sound choppy and confusing!

Subject-verb agreement is a basic grammatical rule that everyone should learn and follow. By understanding the different types of subjects and verbs, as well as the different ways to make them agree, you can avoid common errors in your writing.