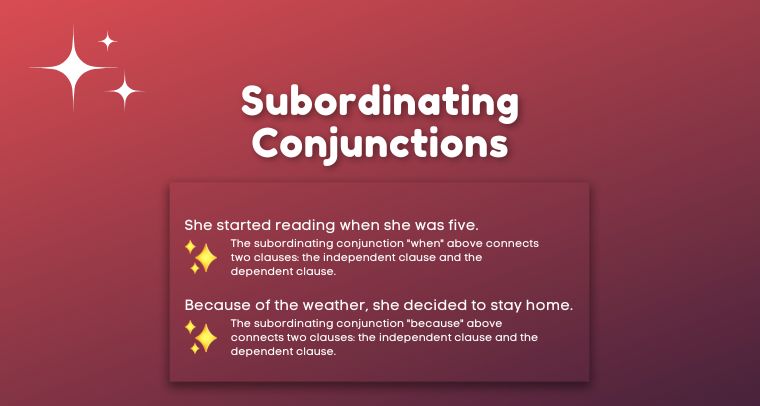 What are Subordinating Conjunctions?

The subordinating conjunctions are words that join two clauses together, but the second clause cannot stand by itself. There are many subordinate conjunctions in English, but some of the most common is “after,” “although,” “as,” “because,” “before,” “how,” “if,” “once,” and ” since,” “then,” “that,” “though,” “until,” “when,” and “where.”

Subordinating conjunctions usually come at the beginning of sentences. They can be used to introduce subordinate clauses or to connect clauses. Sometimes they are called transitional words because they indicate a change from one idea to another in an essay or story.

The Subordinating conjunction is a word that joins two clauses together, but the second clause cannot stand by itself. They’re often called “conjunctive adverbs” or “dependent clauses.”

These words show cause and effect, explain why something is true or happened in a certain way, or contrast with what another sentence says about an idea or topic. For example:

How to use subordinate conjunctions

Subordinate conjunction joins two related ideas or clauses. Most sentences have one main clause, which has a subject and a verb and tells the reader something. A subordinate clause (sometimes called a dependent clause) also has a subject and a verb but doesn’t express a complete thought. It is said to be dependent on the main clause to make sense.

Subordinate clauses begin with words like when, if, that, because, and although. If a sentence begins with one of these words, it must be followed by another clause to make a grammatically correct sentence. An example of this is ‘Because I was ill,’ which doesn’t make sense on its own but becomes ‘I was ill because I ate the wrong thing’ when you add the second clause ‘I ate the wrong thing.’

As in this example, subordinate conjunctions can join two separate clauses together so that they work within one sentence. There are other ways to say the same thing in sentences like this – for example we could join them with ‘when,’ for example: ‘When I ate the wrong thing I became ill.’