Home » Merry vs. Marry: Use the Correct Word Every Time

Merry vs. Marry: Use the Correct Word Every Time 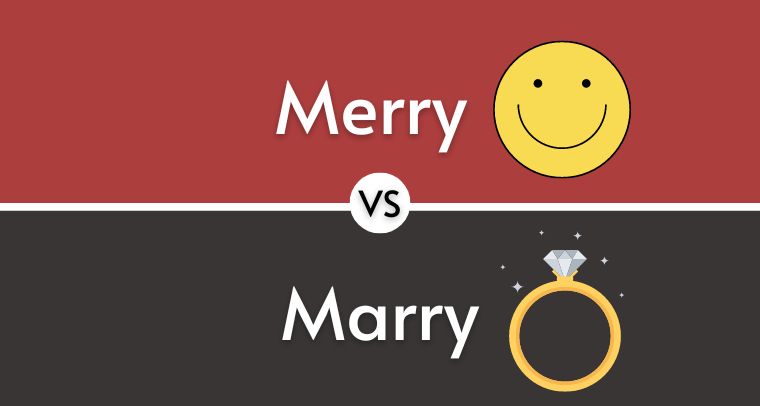 Merry and Marry are two words that have different meanings and spellings. But they have the same pronunciation. Merry is an adjective that means happy and festive, while Marry is a verb that means to perform a marriage ceremony. When you are writing about the holiday season, be sure to use the adjective Merry instead of the verb Marry.

Pronunciation of Merry and Marry

To help with this distinction, think about how each vowel sounds when it’s pronounced:

How to use Merry and Marry in a sentence

When you want to use merry in a sentence with another noun or verb—for example, if you’re writing about someone who’s feeling happy or joy—then merry is the right choice.

If you want to use the word marry in a sentence with a verb, it’s usually paired with another noun (like “wife,” or “husband”).

How to remember Merry vs. Marry

If you’re having a hard time remembering the difference between marry and merry, here’s some help:

If you’re looking for an example of the difference between marry and merry, we can help.

The verb marry is used in the sense of getting married, while merry refers to someone who is happy or upbeat. It’s also sometimes used as an adjective describing someone who has a good time or likes partying. Here are some examples:

If you’re wondering whether the words marry and merry sound alike, it’s probably because they are homophones. A homophone is a word that sounds like another word (or sometimes two) but has different meanings. These two words are also called near-homophones, as they share only one sound in common: “m” or “r.”

In conclusion, Marry means to wed; merry means happy. However, while marry usually refers to the act of getting married, merrier means something can be happier than expected—such as finding out your favorite artist won an award!