Home » Lay vs. Lie (Laying or Lying) What’s the Difference?

Lay vs. Lie (Laying or Lying) What’s the Difference? 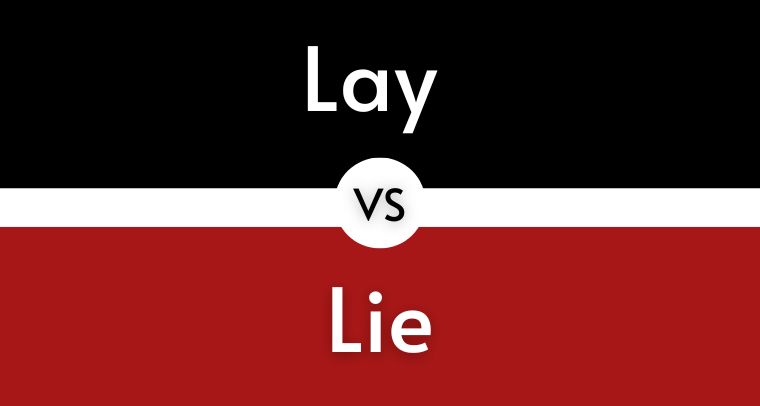 Lay vs. Lie seems to be little difference, but it can change the meaning of what you want to say entirely. In this post, we’ll explain the difference between lay and lie in simple terms so easily understand.

Lay vs Lie: Learn the Difference

The word “Lay” is a transitive verb, which means put something down on a surface, such as lay a trap, or lay an egg. On the other hand, the word “lie” is intransitive which means something already in a flat position. Remember you can’t *lie a book down. Because it is the action of putting a book down so the correct one is “Lay a book down.”

When to use “lay”

In English, the word “lay” means to put down something. For example, you can lay a book on the table. It also refers to the resting position on a surface. Here’s an example of a lay in sentences:

Lay is the correct choice when you want to:

When to use “lie”

A lie is a statement that is not true. However, it’s the intransitive verb form of lie that most people find difficult to differentiate from the word “lay”. The verb intransitive lie means to give a false statement. Here’s an example of a lie in sentences:

Laying or Lying: What’s the Difference?

Laying is the present participle of the verb lay, which means to place or put something down. whereas Lying is the present participle of the verb lie, which means to be in or assume a flat or horizontal position on a surface. The main difference between the two words is that laying is a transitive verb and requires an object. whereas lying is an intransitive verb and does not require an object.

Example: When you are putting something down, you are laying it, as in “I am laying my phone on this bench while I jog.”

Example: When you are reclining or in a flat position, you are lying. You can use it as an action (e.g., I am lying on the couch watching TV) or a statement (e.g., Being lazy on the couch is my favorite pastime).

In conclusion, the best way to avoid mix-ups between lay and lie is to think about the meaning of each word. Lay means to put something down, whereas lie means to recline. The easiest way to remember this distinction is that lay takes an object, whereas lie does not. Another helpful trick is to think about the past tense of each word: laid and lay. Hopefully, these tips will help you remember the difference between lay and lie in the future.