Home » The 4 Types of Sentence Structure With Examples

The 4 Types of Sentence Structure With Examples 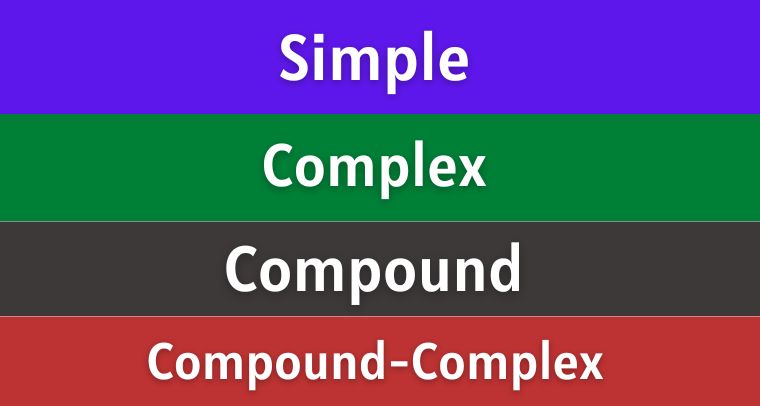 Most everyone is familiar with the basic structure of a sentence. A sentence must have a subject and a verb, and it must express a complete thought. There are 4 types of sentence structures in English: simple, complex, compound, and compound-complex sentences. Each type of sentence structure has its own rules. Let’s take a closer look at each one.

Note: Don’t confuse yourself with 4 types of sentences.

Understanding the 4 Types of Sentence Structure

A simple sentence is one with a subject and predicate in the same order. In other words, the subject comes before its verb and vice versa. Examples of simple sentences include:

Compound sentences have two or more independent clauses joined by a coordinating conjunction (for, and, nor, but, or, yet, so) or a semicolon.

A compound sentence is an example of a well-formed sentence. It has a subject and predicate, and it contains at least one independent clause (or main clause). The other elements that can be found in compound sentences are called phrases, clauses, or words. For example, The flowers need water; I will water them. In this sentence, the two independent clauses are “The flowers need water” and “I will water them.” The coordinating conjunction “;” joins them.

Compound-complex sentences are those that have two or more independent clauses joined together by a coordinating conjunction, such as and. They can also be joined by a comma or semicolon:

Knowing the 4 types of sentence structure can help you to better organize your writing.

Knowing the different types of sentence structure can help you to better organize your writing.

Sentences are the building blocks of writing. They’re more than just words on a page, though—they also have functions, like being an adverb or pronoun in a sentence. Knowing how sentences differ from each other will help you improve your ability as a writer!